Candy B. Graveller is a self-supported bikepacking ride from the airlift memorial at Frankfurt airport to its Berlin counterpart. Find out more about the historical context here.

In April 2018, 71 riders took on this adventure. Since I live close to the start and was already in contact with Follow My Challenge, the GPS tracker company, I was charged with bringing the trackers to the start and handing them out. With a little help from my friend with a cargo bike, thanks Markus! 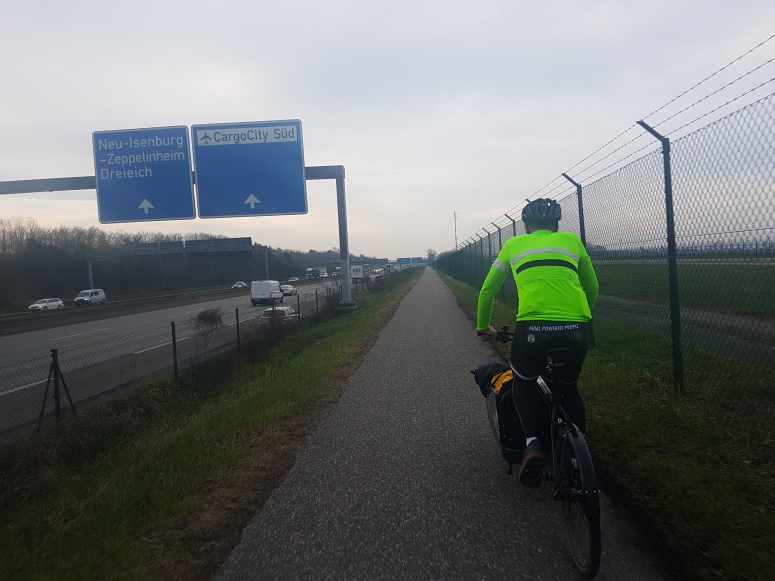 A long line of riders rolls away from the airlift memorial and into the woods. I stay towards the back and use the opportunity to chat with some of the other riders before we would all be on our own. 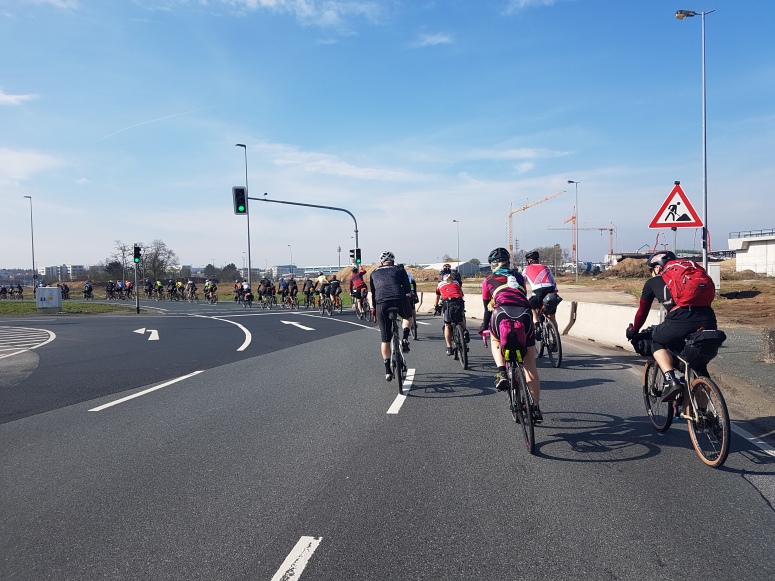 My trusty steel road bike has never let me down, I’ve only removed the aero bars and maxed out the tire width, which leaves me with a minimum of space between tires and fork/frame. This would become an issue later, but on the fast rolling gravel roads of the first section it is a treat to ride. The atmosphere between the riders is great and we make good progress. 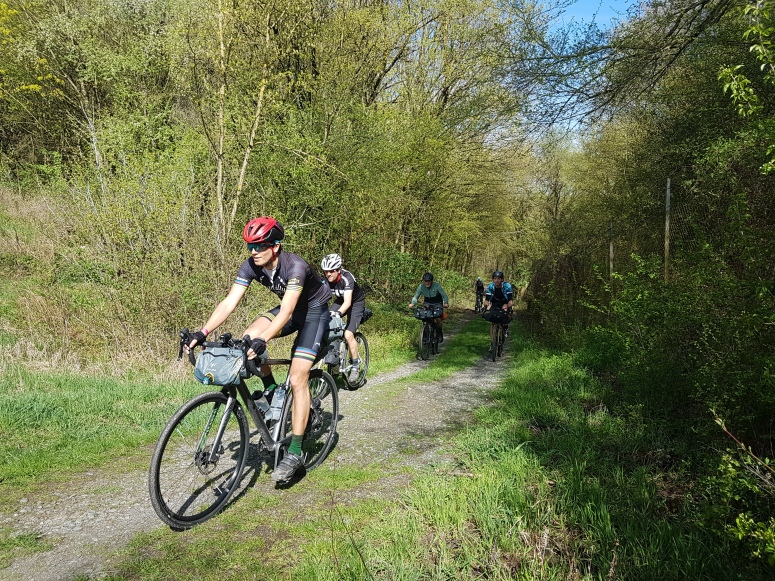 It isn’t until somewhere around Darmstadt with some up and down on single tracks that the field starts to fall apart for good and the groups start to become smaller. We briefly stop on the bridge crossing Main river for some trail magic. That’s how they call it when somebody sets up along the track to support the riders with snacks, drinks or moral support. It’s not against the self-supported codex if they surprise and support all riders equally and it can literally be magical to experience such kindness of strangers. 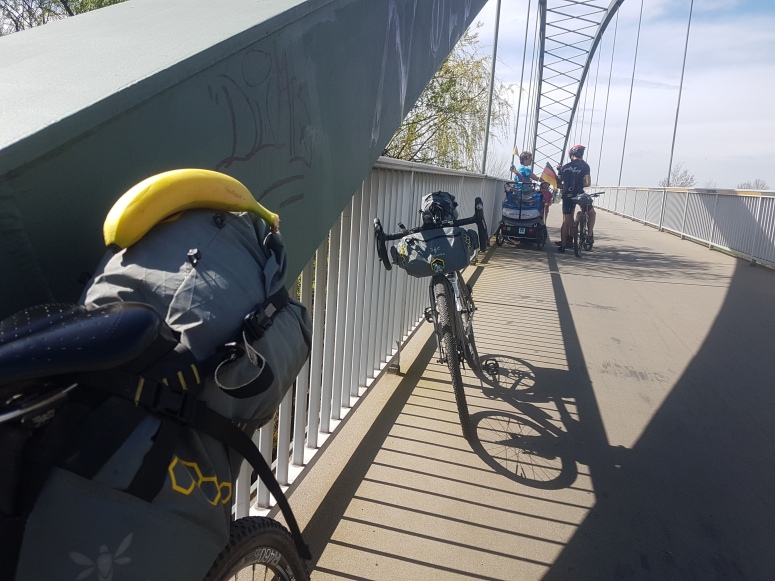 Soon the infamous vineyard climb is coming up. I’ve seen photos before and still attempt to ride it, for a few meters that is. Off the bike and pushing, I realize from seeing the notes on my top tube that I just missed a planned stop. Nothing is coming up now for a good while and I’m almost out of water. But I push on because going back down this hill seems like a bad idea too. 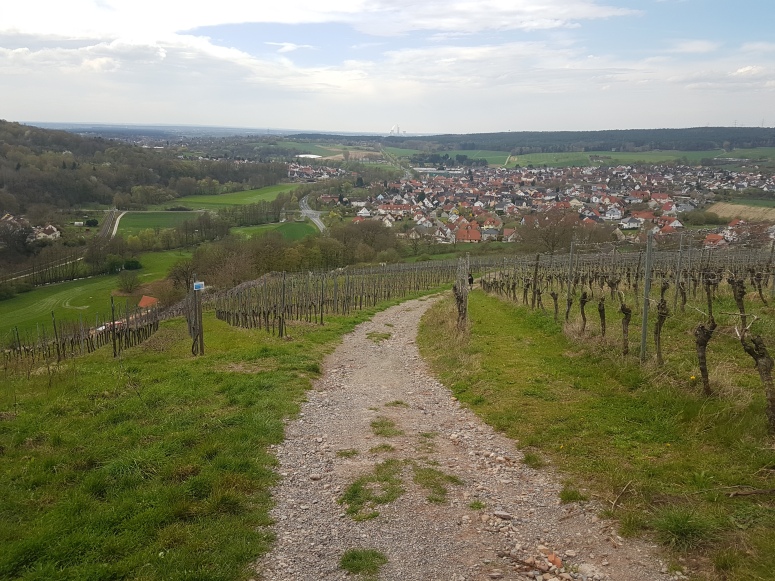 Sometimes you just get lucky: Right on top of the hill, Hans from Fahrradio is waiting with a microphone and trail magic number 2 of the day. Perfect timing.

It always rains in Spessart. At least when I’m there. Today is no different, the drizzle accompanies me until I drop down into Kinzig valley and towards Wächtersbach to the next stop. Fed and with full reserves I feel ready to ride on into the evening. 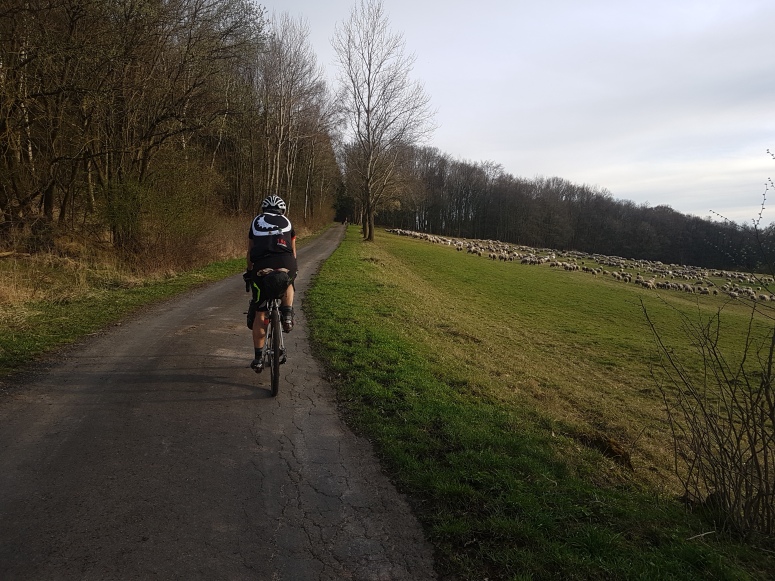 There is a familiar looking bike leaned up against the wall of Kinzigtalsperre. Dirk joins me as we head back into the hills again. We enjoy a dry and warm evening but the closer we get to Fulda, the traces of recent bad weather become more evident. 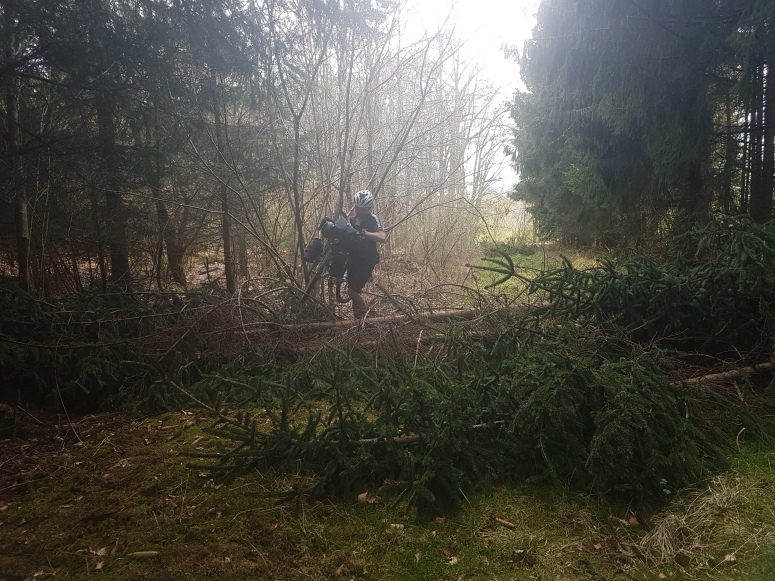 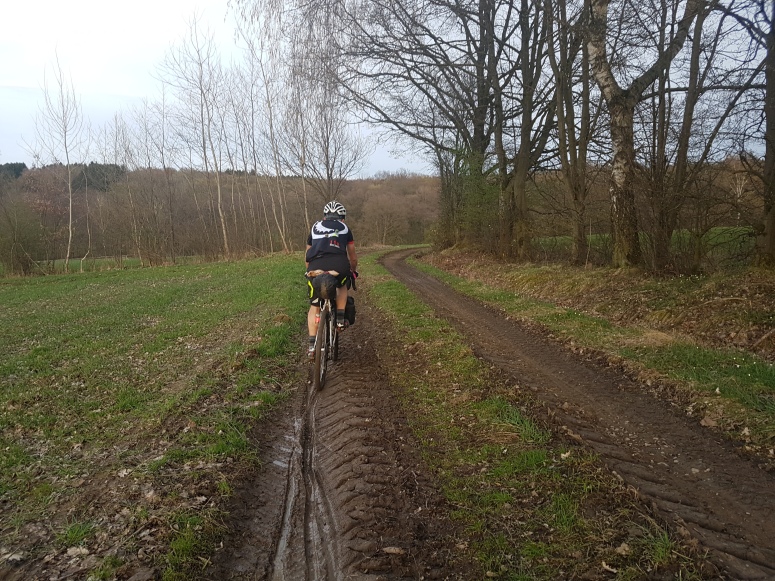 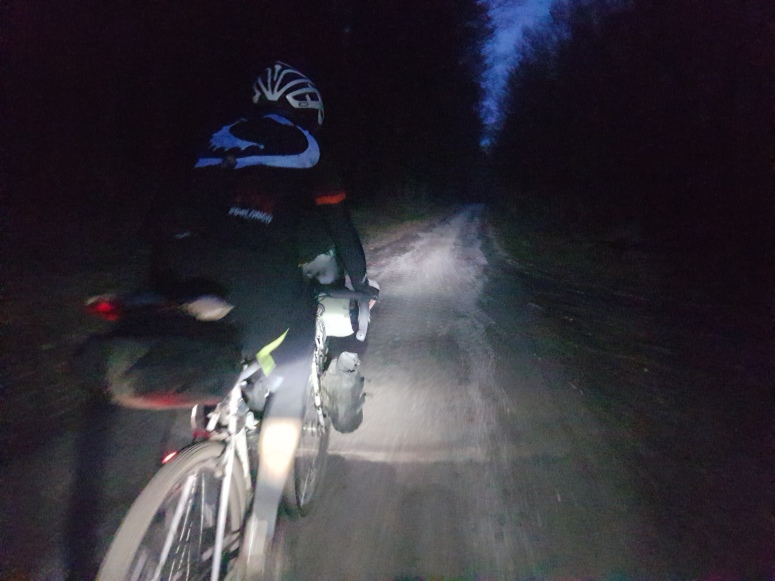 Not long after nightfall we get a view of Fulda’s lights below and thunderstorms closing in above. In another case of perfect timing, we find shelter in a chinese restaurant in Fulda’s old town just as the rain starts pouring down. I’m still puzzled by what the fortune cookie was trying to tell me. 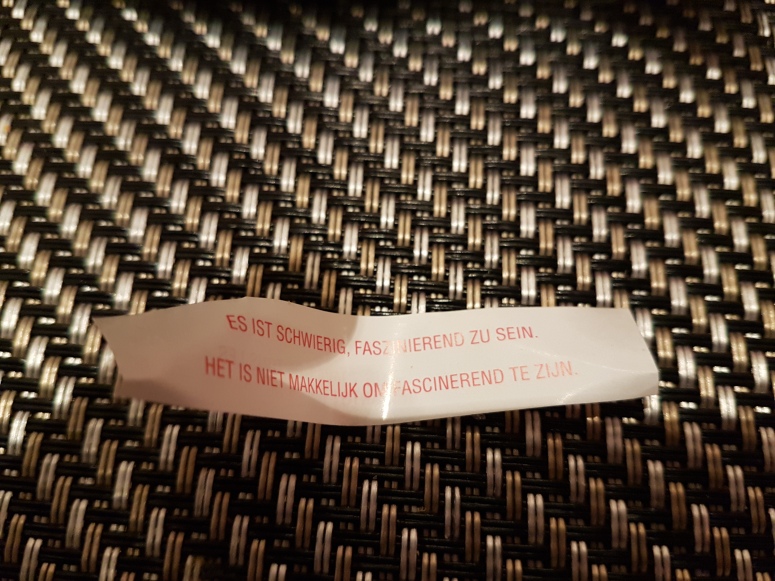 “It’s hard to be fascinating.”

It’s about 11 pm when we start going again. Dirk is starting to have some issues with his chain. We find a quiet soccer field that looks like a good spot to get some sleep. There are roofs and benches on the far side. As we come closer, I can hear their voices before I see the lumpy figures of sleeping bags dotted along the wall. We’re not the first ones to think this is a good spot. The others welcome us in and I unpack my sleeping kit next to the bench I want to sleep on, trying to be as silent as possible in order not to disturb the others. But the bench turns out to be too short so I see no other option than to move to the cold stone floor, wishing I had brought a mat. Soon I am shivering. It is a bad night, not only for me but also for my poor neighbour who later said I was constantly waking him up with my shivering sounds. 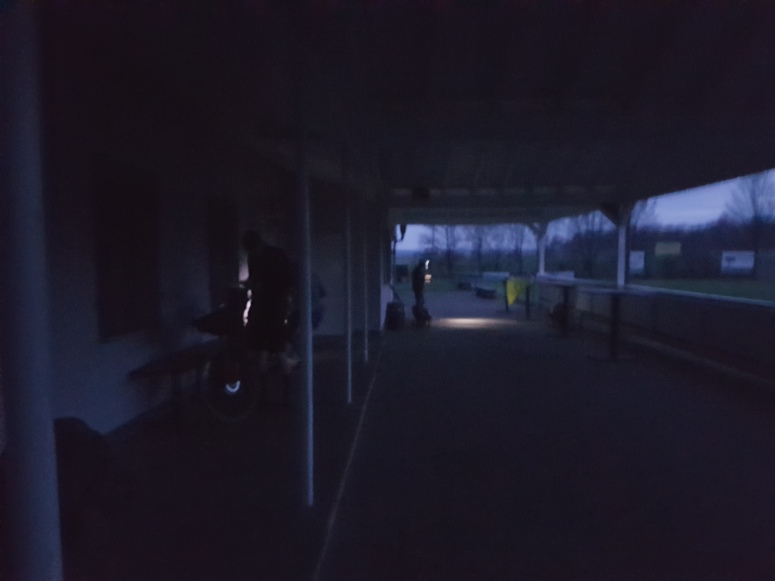 I am freezing with all my clothes on and eager to get going, so set off alone while Dirk heads back into Fulda to try and find a bike shop. The others are getting ready, but I know I’ll have to stop soon anyway and they will catch me up. Just where the Kolonnenweg begins, I can see them passing me while I hide in the bushes. I’ve heard a lot of this part of the former border between East and West Germany which the Grenzsteintrophy famously follows. 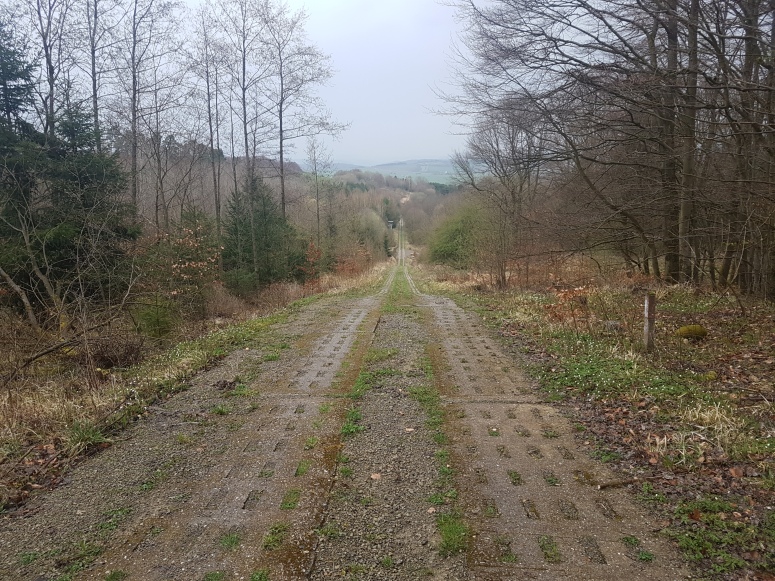 On a bike this really is a special experience. Between taking photos and not being able to pick up speed with the lack of good sleep and more importantly breakfast I would not catch the group in front of me. In fact it turned out to be a much lonelier day than the one before. 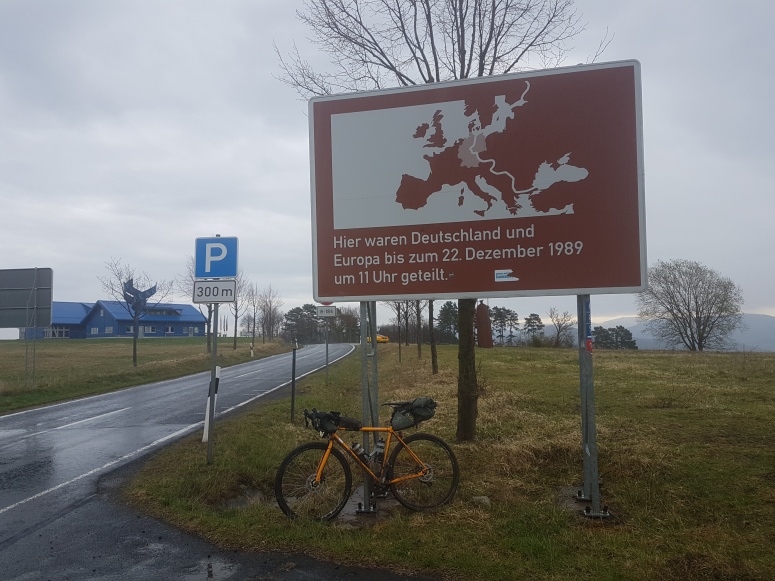 It’s already raining pretty hard when I pass Point Alpha and it wouldn’t stop all day. Apparently it was a record rainfall for the area we were moving through. It starts to get muddy. The tire tracks confirm that I’m still on the right way. 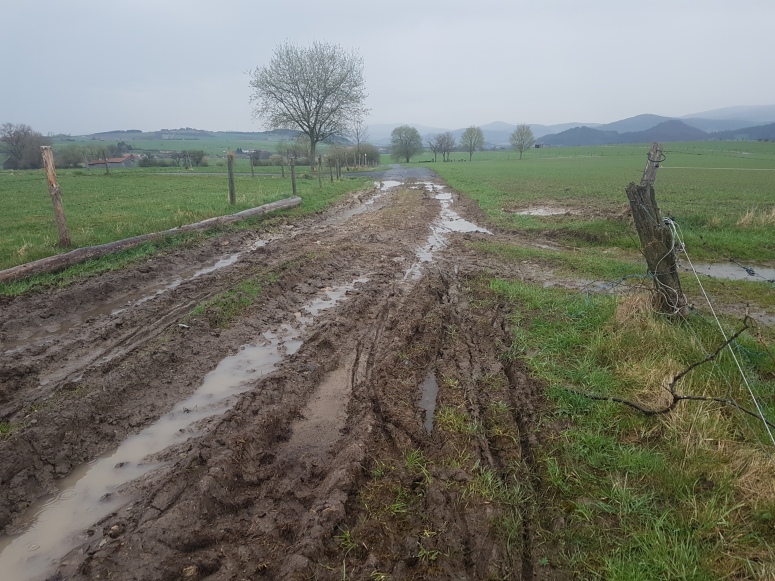 The only rider I keep meeting for hours is riding faster than me, but has problems with his tubeless setup and needs regular stops to pump it back up. 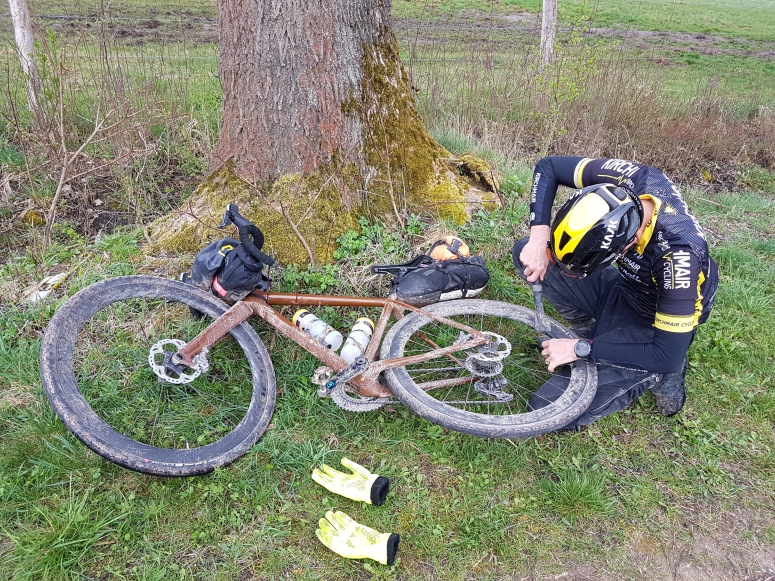 I’m approaching Hainich, one of the last hilly parts before it will become flat towards Berlin and a highlight I was looking forward to. The approach leads up a long straight and exposed gravel climb. Now the luck of perfect timing of the previous day seems to be running out. The lightning strikes are coming in really close and loud, with the thunder following almost instantly. I duck into what was once a container and wait out the worst of it. I’m getting cold in my drenched clothes and decide that I will spend the next night indoors, no matter where. When I finally get to the legendary Hainichbaude, a bowl of potato soup is just what I need to get warm. Some other riders are just leaving when I arrive and for a second I consider joining them, but the soup wins. And so I’m on my way alone again, sliding down a flooded field. 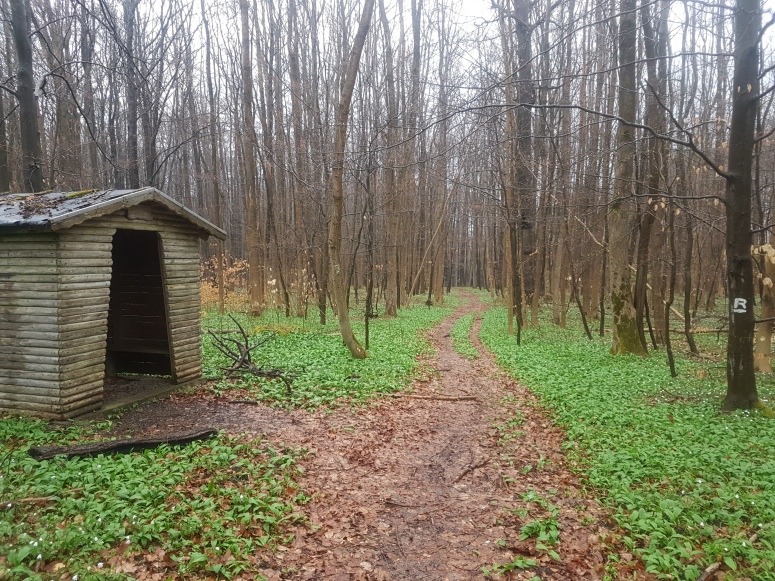 Greußen is the town of my choice, but the guesthouse I find seems to be closed down. On a closer check, I find a paper in the door with a phone number to call, only at this point my phone has surrendered to the rain and refuses service. So I ask at the car garage next door, where the guys are having a barbecue. The owner will be there in 10 minutes, enough time for a few questions about my ride and a lot of laughs. A true classic: “Nice day you chose for a bike ride”. Greußen is not exactly a touristic center and apparently the guesthouse is only used by construction workers during the week. It’s weekend and I have the whole house for myself, the receptionist is driving here from home just to unlock my room. I’ve hassled about checking into hotel rooms with bikes enough to tell from the lady’s wide-eyed look at my dirty bike that she is not going to like the discussion, so I’m not even going there. Before she can say anything I lie that “I have a lock and the bike stays outside”. Of course I don’t and get it inside after she leaves. My boots are just as dirty as the bike at this point, so it wouldn’t have made a big difference. She should have seen us half a day later… 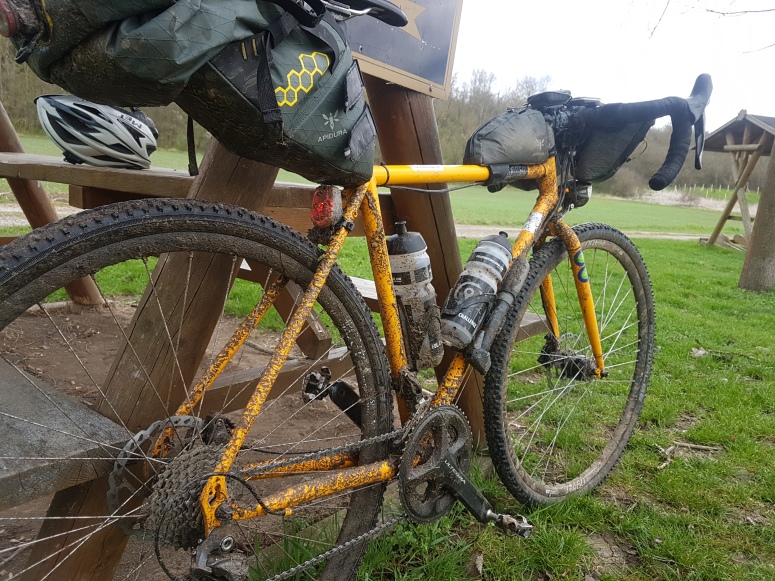 Day 3 begins with an early start and one of the greatest things you can experience on a bike ride, rolling by a bakery just as it opens its doors. 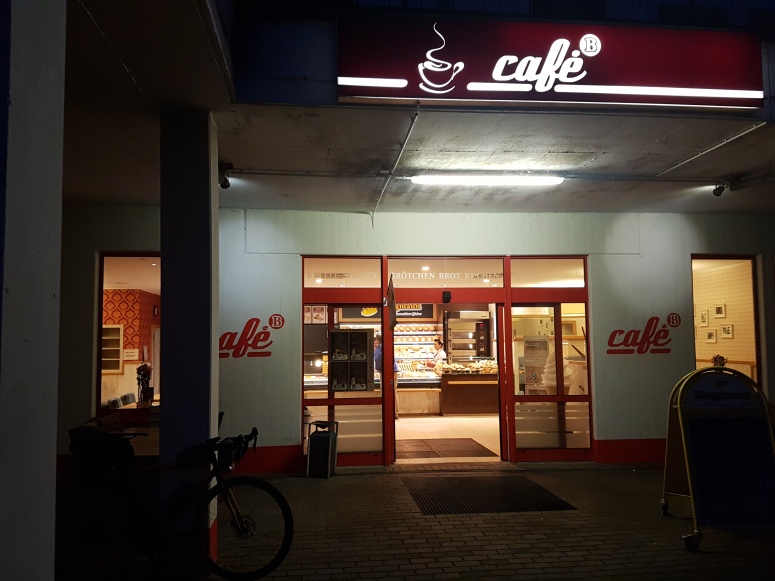 It would quickly go downhill from here. The rain has turned into a light drizzle but the first few farm tracks set the tone. Everything’s drenched and this mud here is different, it sticks like clay. After a few kilometers the stuff locks up my back wheel. I stop at another bakery and ask for water to clean the worst of it, hoping that stretch was a one-off. This mud has a consistency I’ve never seen before, so sticky. 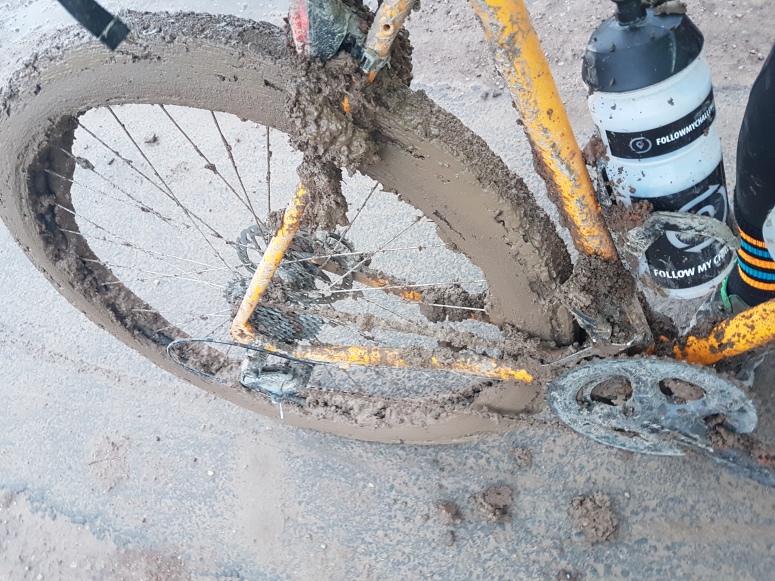 Directly out of the town starts a ridiculous bit of slight uphill where I even slip while walking. I have to push the bike along the grassy bit on the side just to get through. When there is no grass on the sides anymore, I have to carry the bike because even pushing, the mud would lock everything up in no time. With every step it feels like half of the ground gets stuck to my feet. The minimal clearance makes it much worse, though I’m not even sure how the guys on mountain bikes got through here. 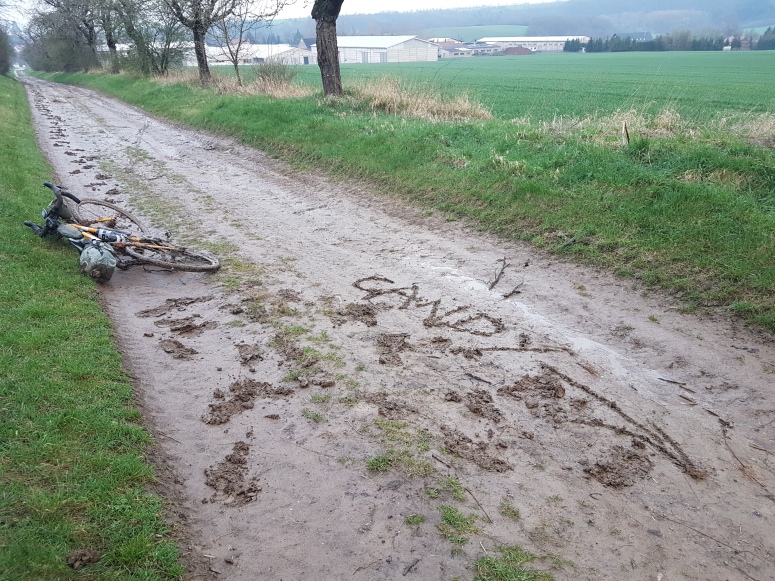 I can only carry the bike on my shoulder for so long until I have to push again. Mud straight from hell sticks to everything. This is where I maybe should have looked for ways around the mud, but I stubbornly stick to the track and make it so much worse by missing one of the intended gravel paths by a few meters and going straight into a field. It KIND OF looks like a trail, but the mud here is ridiculous. 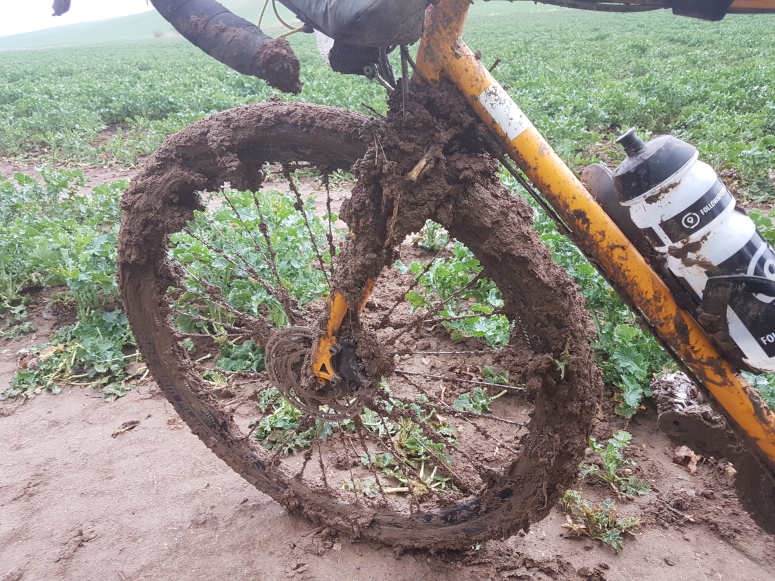 There are no tire tracks, which should have given it away, but I’m probably too fed up to take notice. I don’t notice my mistake for a while until the trail reappears behind a bush and I can finally get out of the field. But the damage is already done. Dragging the bike through the field, the rear derailleur snaps right into the spokes. This is game over and I can’t even open the chain until Andreas will pass me on a bike path a while later and help with that. All I’m trying at this point is to get out of the mud and into civilization. A picture describes the state of that bike better than words. It’s ridiculous. 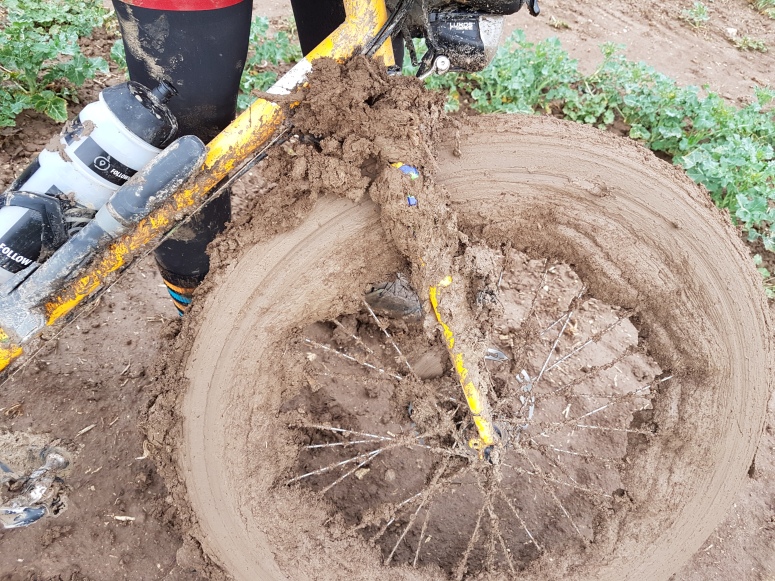 My last hope is the town of Heldrungen and the bike shop Google maps indicates there. It feels like hours getting there, pushing my chainless bike, the rear wheel bent badly and rubbing at the frame. After cleaning the worst, again, with the help of a friendly local, I give them a call along the way just to make sure. They pick up but only tell me the shop is closed before quickly hanging up again. I can’t think of any alternatives so still make my way there only to be sent away by a guy working on the roof of his house. Turns out he closed the bike shop for good a while ago. Google doesn’t know everything. The train station is another half hour walk away. It’s nice and sunny again. Timing. 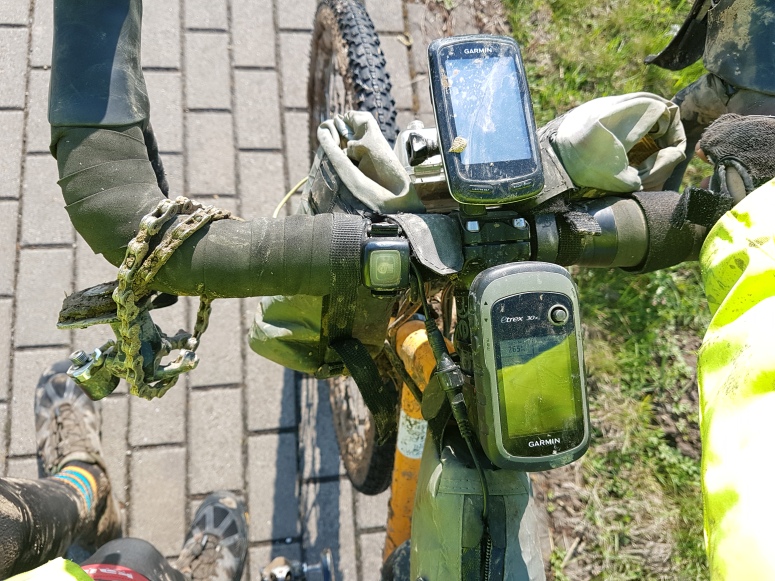 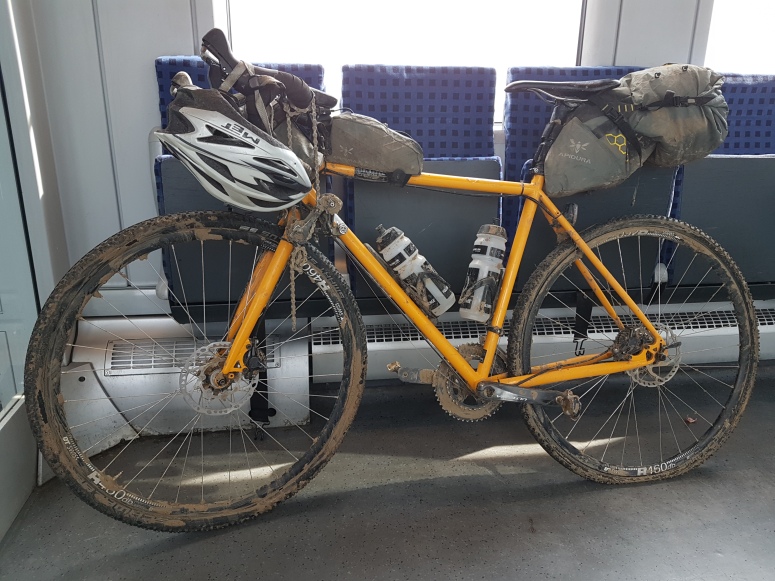 There’s no Candy B Graveller planned for 2019, but I hope to finish the course next year, probably with a different bike that time…

Here‘s some of what my GoPro captured.

More photos and route on Strava.

Thanks to Gunnar Fehlau and everybody involved for an adventure in the middle of Germany!